There are few foods that rival the status of chicken fried steak and enchiladas in the state of Texas. But there is one that reigns above all others with it’s status. Texas barbecue.

It’s so iconic that Texas Monthly devotes an entire publication to it each spring. And there are cook-off events throughout the year to give amateurs and professionals the chance to claim the top prize in several meat categories.

So, go ahead and indulge in this Texas tradition and bring everyone together.

For Smoked Brisket you will need…

Smoking briskets is one of my husband’s favorite summertime activities. From cook-offs to family celebrations, you’ll find him manning the pit. And I bet each of you have someone like that in your family, too!

The first thing you want to do it trim your brisket. Even though I bought a pre-trimmed brisket, there’s still a bit more to do. You want to remove any of the really hard fat that isn’t going to melt down, so the meat will cook evenly. When selecting a brisket at the store, try to bend them in half length-wise. This will give you an idea of how tender the meat is. The more flexible, the better. Flip the brisket over to show the grain of the meat to determine which end of the brisket you are going to serve from so you get the best marbling. Cut the tip of it at a 45-degree angle. This will help once it’s cooked to be able to know where to cut to get the best slices possible and prevent you from cutting the wrong end or direction. Go ahead and get your fire started in the smoker so it’s at the right temperature once you’re finished preparing the meat. We started ours with charcoal and aged oak to get it to a temperature of 250 degrees. Mix together all of the spices in a large bowl and then coat the entire brisket with the seasoning. You want to get into every nook and cranny to make sure and spread the flavor evenly. Open the pit each hour to spritz the brisket with Apple Cider Vinegar. This will help keep the meat moist during the smoking process and break down some of the tougher portions of meat. Don’t flip the brisket or take a long time doing this, though, because you don’t want to lose your heat. After four hours, remove the brisket from the pit and wrap it in three layers of heavy duty foil to ensure it’s completely covered and the moisture is locked in. Place it back on the grates, still fat side up, and crank the fire up to 325-350 degrees. Cook it for four additional hours untouched. Once the internal temperature is around 200 degrees, remove it from the pit. Let it rest for 20 minutes before slicing. Everyone has their own special recipe and way of cooking Texas barbecue, so I hope these tips and tricks help you perfect your home recipe, too. Share with us how you prepare your brisket! From all of us at Texas Table Top, enjoy! 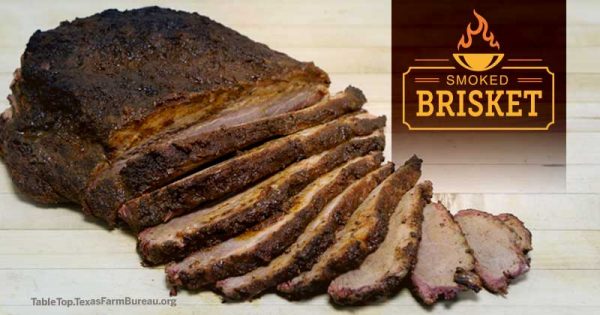